Interaction Portal UX and updates - what can I change?

Interaction Portal UX and updates - what can I change?

This design pattern guides consultants and customers on making decisions about Interaction Portal customizations, specifically, which areas of the screen they can customize and which areas to leave alone in order to ensure that the next update isn't a headache.

You've been asked to make a change to out of the box UI in the Interaction Portal. Arming you with an answer as to whether that Is advisable, supportable and updatable is the goal of this article. Essentially if it isn't supportable or updatable - it won't be advisable!

Take a look at the requests you are getting and do a self-assessment on likely update risk. While most UI sections are either final or marked as extension points in Pega Customer Service 8.5, given the number of rules in the system, exceptions will apply. Being aware of whether something can be done without a final rule override is probably a good start but the following questions should all be considered when asking yourself the question of whether a change is advisable or not.

Not a big list to consider, but a list where a few examples will help illustrate the potential issues. If you are considering UI changes that match items on the previous list, reconsider or look for alternative solutions before implementing. In the majority of cases, the cost of the work isn't just the opportunity cost of doing them, but the much bigger cost of upgrading and maintaining them over time if you've changed something fundamental in the product that subsequent releases will not support.

The following examples should be familiar to you if you have some experience with older versions of Pega Customer Service.

Screenpops are a common areas where we see overrides, some good and some bad (as measured against the list above). Generally, feel free to change any of the content of the screenpop, such as the identity of the contact (if known), whether the contact is verified, and the contact data that you want your Customer Service Reps to see prior to the interaction. Don’t customize the dimensions of the screenpop or the channel and buttons. In the future, if we want business users to be able to change those elements, we will make them editable in App Studio. 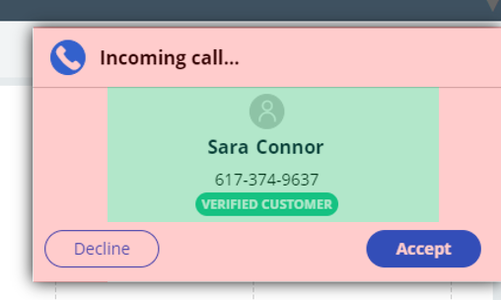 The service case is another area where customizations are performed and sometimes fail the evaluation criteria we outlined above. Sometimes those changes are due to out-of-date knowledge about the capabilities of the product. A lot of focus on the product over the last few years has been to remove the need for customizations in Dev Studio. For example, it's possible to remove dialog from service cases through a simple checkbox configuration in App Studio, rather than overriding the section rule to remove the UI. Removing dialog through the configuration not only removes the display, it removes calls to the server and it removes the I/O of that data being requested from the database. Making this change through a section rule only does not remove the calls or I/O. Modify the contents of the case, but do not modify the case headers and buttons that progress the case.

While there are a multitude of ways to create a service case, the best practices for doing so have changed drastically in Pega Customer Service 8.5. While Dev Studio still allows you to tweak UI sections and harnesses (perform, review and confirm), 8.5 introduced case type templates to App Studio, removing the need (or in some cases the possibility) of tweaking UI – given that views are heavily mandated. In preparing for the Cosmos Design System, we recommend that you use case type templates to create new service cases and that you rebuild existing case types to use case type templates. The Cosmos Design System will not include UI sections and harnesses, since many UIs will be automatically generated, so do not spend time on harness customization.

Headers and tabs (and interaction drivers)

Another area where new best practices are available is in the part of the UI that is specific to channels and navigation aids. While some were App Studio configurable in earlier releases, in 8.5 all channels and tabs are configurable through App Studio. If you have new tabs that populate the portal with information from external apps, supported extension points are available for that use case.

The interaction driver is another part of key supporting functionality that occasionally gets customized. As the following warning illustrates, the new CS Guardrails list is keeping a vigilant eye on the location of specific customizations that are not advisable and certainly are not expected to be updatable. Keep an eye on CS guardrail warnings, as they are focused (and will continue to be focused) on updatability focused issues.

See any patterns in the examples above? One pattern that stands out is the difference between content and structure. You can change the content, but you should not change the structure. That’s a bit of a mindshift from 7.x and earlier releases of Pega Customer Service where the application was more open, and there were few restrictions on what changes you could make.

A rough analogy to help illustrate the point is modification of a house. Change the house color, change the contents of each room, add that shower to the half bath if needed, but don’t expect to add a basement to an existing house without a lot of pain and cost because the architect never designed the house (or its foundations) with that need in mind!

If it doesn't pass the advisable, supportable and updatable sniff test, don't implement the UI change.

Following this design pattern gets you up to date on areas of UI customization that are supported vs ill-advised. It provides guidance on changes to the UI architecture in the 8.x series of releases, and sets you up well for new design patterns coming in newer Cosmos design systems in the coming months and years.

An interface that provides users with an organized set of work tools. Users navigate the application, collaborate, and complete work assignments mainly through portals. Typically, you create a separate portal for each user group within your application. For example, you can create a portal for regular employees, and a separate one for their managers. Most portals contain a navigation menu that leads to various pages and dashboards, as well as a menu for creating new work items. Additionally, portals might also include widgets that improve work efficiency. For example, you can design a portal that has a widget for frequently used reports, which helps managers save time and oversee their projects.

An interval of time that is defined in a service-level agreement. It is the suggested resolution time for an item, such as a case or stage.

The system can reuse rules throughout your application. For example, in an application for ordering replacements parts, you can define a user interface to capture an address, and reuse the same rule for the UI to capture both the mailing address and the billing address for the order.

You define rules in an application to create a business solution for your organization and customers. Rules provide flexibility during the development process and help you design applications more efficiently, so that they can be implemented again in future projects.

Screen layouts help you determine the overall presentation of your portal. While harnesses function as containers for various sections in your portal, screen layouts define the general appearance of the portal. For example, you can insert a screen layout that defines the width, alignment, and background of your screen into your portal harness.

Screen layouts support responsive display and can be configured to automatically adjust your interface to scale its width and height to various screens, for example, on a mobile device. Screen layouts also include Accessible Rich Internet Applications (ARIA) roles by default, which help assistive technology users to navigate the main areas of the application, such as the primary menu and the search.

A container that organizes the content and structure of a page in the user interface. The layout of a harness is defined by a template. For example, you can base a portal harness on a template that divides the portal into three separate areas: a header, a navigation pane, and a large content pane for displaying documents.

A setting that determines which elements in your application do not comply with Pega best practices. For example, guardrails typically flag custom components that require manual changes during upgrades. You must respond to guardrail warnings to ensure that your application meets the latest requirements for efficiency and ease of use, and save development time. By following the guardrails, you can secure a good compliance score. High compliance scores are a sign that the application is well-designed, efficient, and easy to expand.