Prior to deploying Pega Customer Decision Hub, a client used to load data specific to each campaign in a separate table.  Since that client ran multiple campaigns, there were well over 100 ad-hoc tables in the client’s legacy system.  Since the star schema is not suitable for so many ad-hoc tables, the solution was to create one table called adhocfield table. Data is inserted into the adhocfield table and columns are dynamically added to the table based on campaign needs.

When data has been imported, it can be used for Campaign 1.

When Campaign 2 needs to be fielded, an additional set of 5-10 ad-hoc columns may be created and data inserted into those columns, if necessary.

Note: It is necessary to limit the total number of columns in adhocfield table to under 500 to minimize the impact on database performance.  For this purpose, the columns that are not required may be deleted periodically.

Data flow can be configured using out-of-the-box database table dataset save functionality. This functionality provides you with two options:

Out of the Box database table dataset save functionality in Pega Customer Decision Hub data flow.

When the Insert new and overwrite existing records option is selected, columns 1-5 will be overwritten to NULL when users try to insert values for columns 6-10. In other words, this option overwrites the entire row instead of updating the row, as shown in the illustration below:

How can you update the columns 6 to 10 without wiping out the data in columns 1 to 5, when using the option to Insert new with overwrite existing record?

Receiving and updating partial payload (this is, updating partial columns of any single row of database table) is not a recommended option in OOTB[SM1] [SZ2] [SZ3] [SZ4] [SM5] [SM6] [SM7] [SZ8] [SZ9] . Merge Shape [SM10]  is an out-of-the-box (OOTB) utility in the data flow rule which can merge two records into one and [SZ11] can help us in this situation. The Merge Shape utility will result in read on a given record before executing an update on the same record via destination dataset option as shown in the image below: 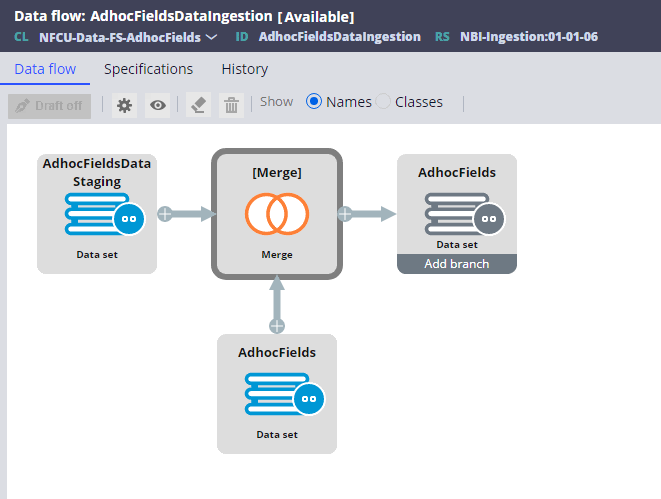 Merge shape configuration settings as shown in the data flow: 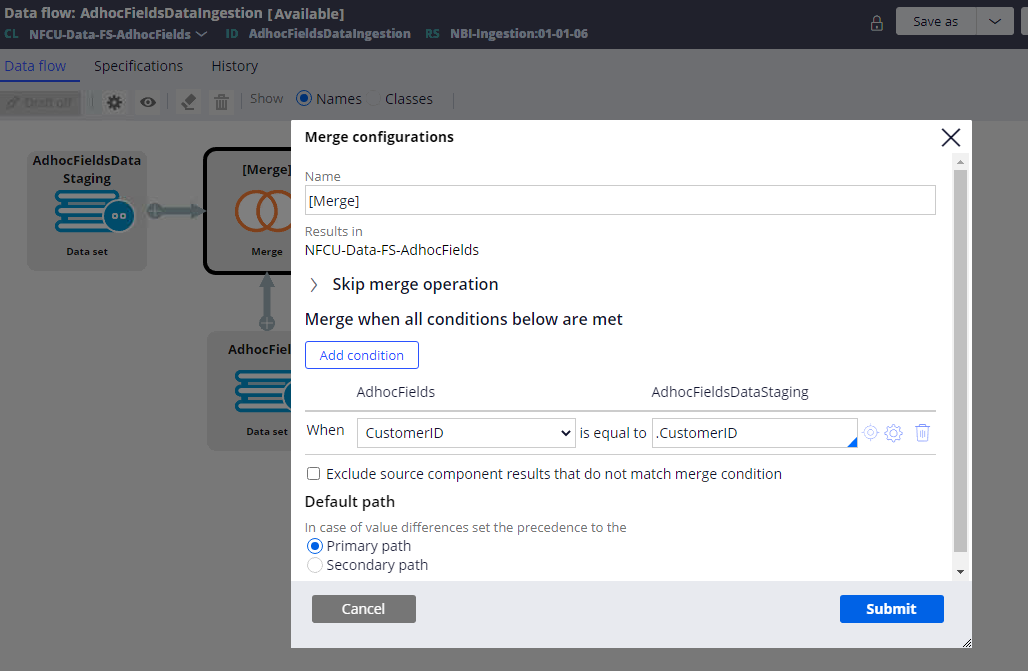 Within Pega Robot Studio, solutions and projects are containers for all the items required to build and run a project. Solutions can include multiple projects. Once you deploy a solution to the Pega Robotic Automation Deployment Portal, it is known as a package.

A graphical representation that models a business process in your application by using graphical shapes and connectors to define a sequence of events. You can edit a flow in the life cycle of a case or by using the Flow form.

A collective term that describes a rule instance or a data instance. For example, a customer record would include data specific to a given customer, such as name, telephone number, and customer account number.