Actions can be created, removed or updated in the application through importing a csv file, as well as manually.

Actions contain the metadata required by decisioning strategies to implement the business rules and presenting an offer in a specific channel. Business users are responsible for maintaining these data in order to ensure the action decisions are executed correctly and the customers receive the most relevant actions.

In a mature client Pega Customer Decision Hub (CDH) solution, it is commonplace to evidence many hundreds of actions to be able to address the business objectives. Manually maintaining such high numbers of actions is both time-consuming and prone to human error. For such reasons, it is a common best practice to maintain the actions through a file import to the application.

Creating or updating an action

For updating any existing action, Export csv file link is present for each business issue and group on the Actions landing page where a csv file can be exported that contains the existing actions and metadata. This file can be imported back after the modifications are done on the actions. Updating of existing actions will use the pyName property of an action for matching the actions in the import file and the application. 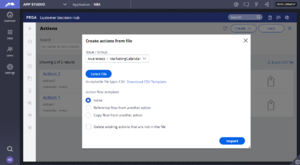 The existing actions in the application can be deleted by selecting the Delete actions that are not in the file option before progressing with the import action on the Create actions from file modal window.

The number of actions that are successfully added, updated or deleted, together with any errors occurred are presented on the modal window following the import operation. After finishing the import, the Actions landing page has to be refreshed for the changes to appear.