How to use EMIR regulations

From PegaWiki
How to use EMIR Regulations / This is the approved revision of this page, as well as being the most recent.
Jump to navigation Jump to search

How to use EMIR regulations

The European Market Infrastructure Regulation (EMIR) is a European Union regulation – introduced in 2012 with Directive 2012/648 – whose goal is to make the Over The Counter (OTC) derivatives market more stable and transparent as well as to reduce systemic risk.

EMIR affects all market participants of a derivative transaction, and from an applicability perspective its geographical perimeter is not limited to counterparties established in EEA1, but it extends also to:

EMIR has therefore certain extra-territorial effects whenever there is one of the two EEA nexus indicated above.

CLM supports with questionnaires – one for entities and one for individuals – not only the determination of the classification the customer belongs to, but also the three main EMIR obligations:

Specific OTC derivatives between certain market participants must be cleared via a Central CounterParty (CCP).

OTC derivatives between certain market participants which are not cleared via a CCP are subject to risk mitigation obligations.

All derivatives, OTC and non-OTC, must be reported to a trade repository.

Out-of-the-box, CLM triggers the displaying of the EMIR questionnaire when:

The EMIR questionnaire can also be further configured to apply or not apply considering from a jurisdictional point of view both the status of the financial institution offering the product and the customer type as per the following table:

3 The assumption is that the list of products used by the financial institution contains the EMIR flag.

How and where to configure triggers

You can configure the applicability logic for EMIR questionnaire using the ‘ApplicabilityMatrix’ decision table. For information on general configuration of this rule, see the 'Applicability matrix' section of the implementation guide.

The other important decision logic rule is the ‘ApplyEMIR’ When rule. 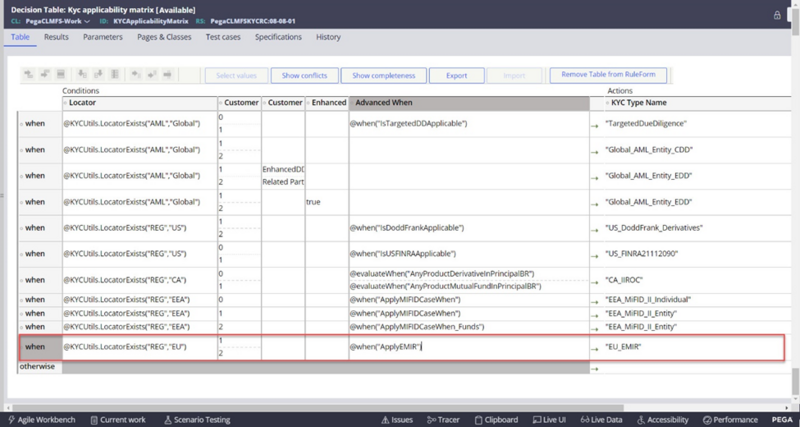 Implementations based on CLM 8.5 or earlier versions use the ‘ProdRegulationsMasterAppliesWhen’ decision table. This also uses the main decision logic in the ‘ApplyEMIR’ When rule. 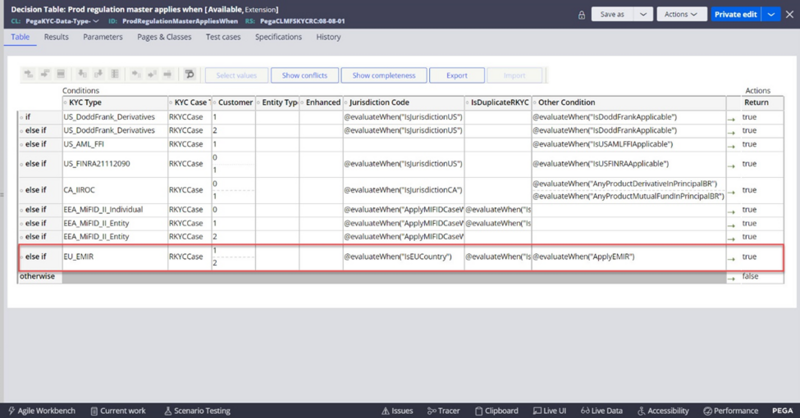 You will need to configure the specific EMIR applicability logic for your financial institution in these above-mentioned rules.