Extensibility is a software system design principle that simplifies the addition of new capabilities or modification of existing functionality. It’s also a measure of a system’s ability, or the level of effort required, to extend the default logic. Extensibility has a lot of advantages such as easier maintenance, easier updates, promoting reusability, faster development, savings in testing time, etc.

In a multi-layered application (for example, base application, segment specialization and customer implementation), design is a key factor for ensuring proper maintainability and extensibility. Improper design would compromise the quality of the application and make its maintenance very complex. For example:

Once overridden, logic should be maintained in two versions (base and customer implementation) of the rule and customers need to manually retrofit any changes into their own versions whenever the base version changes.

The following list of patterns, in combination with the traditional specialization techniques like class, ruleset, etc., will help to reduce the duplication of code and improve the maintainability and extensibility of the application.

Parametrization is a pattern wherein the logic inside the Pega rule is driven based on the value that is passed as a parameter to the rule, instead of hard-coded data. Parameters are always the preferred option for implementations, instead of having different versions of the same rule with minor specializations doing the same thing. The concept of parametrization is not limited to data transforms, but can be applied to many Pega rule types, like data pages, report definitions, activities, flows, etc. The main objective of parametrization is to:

For example, let's take a use case where business segment is set via a data transform, and based on the business segment, associated products are retrieved. Incorrect and correct behaviors on how this use case can be implemented are shown in the image below.

Extension rules are designed and intended to be overridden to meet application needs. Typically, the overriding rule is updated in the implementation class. Rules that are intended to be extended are called stub rules, marked as extension, without any logic in them.

For example, let’s take a use case of data synchronization. Incorrect and correct behaviors on how this use case can be implemented are shown in the image below.

Modularization is a design pattern that emphasizes segregating the logic into independent, reusable modules, as opposed to building a monolithic rule. The implementation logic has to be modularized into smaller chunks of reusable logic, and typically gets wrapped under a single rule. Code modularization promotes:

For example, let’s take a use case of configuring customer information. Incorrect and correct behaviors on how this use case can be implemented are shown in the below image.

Incorrect practice for a modularization pattern 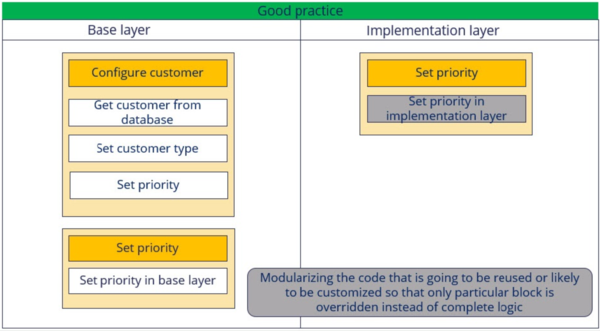 In the Pega context, a component is a collection of rules that creates a reusable, plug-and-play feature that can be added to any application in an enterprise. Components are not tightly coupled with any application. They are built in one or more component rulesets and are self-contained. All the necessary rules for the execution of their process should be in these rulesets.

Components should be created when there is functionality that could be used in multiple applications. Once a component is included in an application, it can receive inputs from the application and can then process the input to return the intended output.

As components provide critical features in a plug-and-play mode, they naturally assist in easier extension of functionality; help in moving away from reinventing the wheel.

Examples of components would be Optical character recognition (OCR) and Digital signature, which are common features used across multiple industries, and instead of building those features as part of a single application, it is good if they are componentized so that multiple applications can use them as plug-and-play features.

For more information, refer to the following articles on Pega Community: