From PegaWiki
Ethical bias check algorithms / This is the approved revision of this page, as well as being the most recent.
Jump to navigation Jump to search

The ethical bias check is a simulation type that can be used to test if unwanted bias is introduced in the Next-Best-Action strategy. This document describes the use of the rate ratio and the Gini coefficient in detecting bias.

The metric used to detect bias is Rate ratio for categorical or binary fields and is the Gini coefficient for numeric (ordinal) fields.

The following Pega data types are allowed as bias types, these fields can be added as bias fields in the Ethical Bias Policy. Please note that only users with pzBiasPolicyConfiguration privilege added to their access group have permission to configure the bias policy.

Rate ratio is the measure of discrimination used for binary or categorical fields and is based on a contingency table. It's also called risk ratio, for example in the medical field, but we use rate ratio as in our case being selected for an action is not a risk. Another related term for this is disparate impact, although there is a small difference with that definition. In this case, there is no defined direction for the bias, it could be a bias in both directions, but apart from that the definition is the same.

The rate ratio is calculated from a 2x2 contingency table.

An example of a contingency table is given below:

The rate ratio ranges between 0 and infinity.

Setting a bias threshold for the rate ratio[edit] 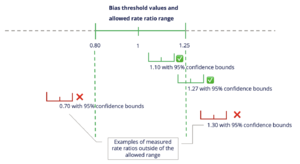 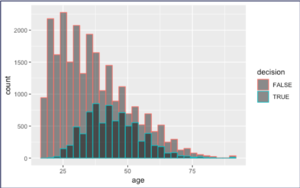 The GINI measure is used to calculate the bias in an ordinal field, for example age. It expresses how much age can be used to discriminate between the group that receives action X and those that don't receive action X.

Note that the GINI coefficient is directly related to the Area Under the ROC Curve (AUC) in the way that AUC = (GINI+1) / 2.

Setting a bias threshold for the Gini coefficient[edit]

Methods for determining the confidence intervals[edit]

For the rate ratio, the confidence interval is calculated using the following approximation on the error on log(RR):

In Pega Platform, the confidence level for detecting bias above threshold can be set through a Dynamic System Setting (DSS). The default value is 0.9999 (or 99.99%). Note that lowering this level increases the probability of false alerts on bias detected.

For each numeric field: 1 Gini coefficient

The numbers that can be part of the bias report are illustrated by this example:

An application-specific access control element that is associated with a class and an access role. Using privilege rules in an application is optional, but they can offer improved control over access than access roles alone.

A set of users who receive access to application or network resources through their membership in the group. When a user is added to an access group, that user receives the permissions that are associated with the group. If a user belongs to more than one access group, that user acquires the set of access permissions that are associated with each group. You can create multiple access groups within an application to convey different levels of access based on user roles.

The top level of the three-level organization hierarchy that is available for use in all of your applications. The organizational structure affects the management reports, statistics, and rules that are available to users in that organization. One system can support multiple organizations. An organization is an instance of the Data-Admin-Organization class.

A target range of values. When a threshold is exceeded, an alert is generated. You can manage threshold settings and specify whether alerts display by updating the prconfig.xml file, or by using dynamic system settings.

A Pega Platform method, distinct from a Java method. An operation that can be performed by one step of an activity ( Rule-Obj-Activity rule type), or by a Parse Structured rule ( Rule-Parse-Structured rule type).

An element that defines a Java function and makes the function callable from activities and expressions. A function is an instance of the Rule-Utility-Function rule type.