From PegaWiki
Data Integrity – Patterns & Anti-Patterns / This is the approved revision of this page, as well as being the most recent.
Jump to navigation Jump to search

Data Integrity is a quintessential part of any enterprise application design. With multiple requestors accessing and updating data within an application, it is imperative to make design choices which eliminate chances of data integrity issues creeping in. In this article, the emphasis will be on detailing patterns and anti-patterns relating to the use of the Obj-Save method, the Obj-Save with write now method and the use of explicit Commit methods in an activity. The Save-DataPage method also falls in the same category, but its use has not been detailed in this article.

Pega's out-of-the-box flow processing takes care of required commits, whenever a flow ends, whenever an assignment is created or completed, etc. To avoid interference with the default transaction model provided by Pega Platform™, it’s recommended not to use explicit Obj-Save with write now or Commit methods in flow-related rules, like utilities. Explicit use of Obj-Save with write now or Commit methods can cause data integrity issues. Flow processing already manages the boundaries of work-related database transactions, and adding explicit commits can create synchronization problems between what is assumed to be in the database and what is actually in the database. This situation can make it extremely difficult to track bugs and can result in stale database records.

Pega Platform default behavior for performing Obj-Save is to defer the actual UPDATE/INSERT SQL command until the system performs an automatic commit. As a result, you can perform multiple back-to-back saves on the same object instance and the Pega Platform engine will combine these updates into a single cumulative update at the time of the commit. This maximizes concurrency within the application. Using Obj-Save with write now enabled or Commit methods in an activity interferes with the default Pega Platform behavior.

There could be legitimate reasons for performing explicit Commit or Obj-Save with write now methods, such as a need to save objects (non-case objects) through custom activities or cases through activities handling bulk processing. But using these methods can be dangerous if proper locking and error handling is not done. As this is not a common, recommended practice, appropriate warnings are shown on the rule form whenever these methods are used. It is strongly advised to pay heed to the related guardrails.

The Obj-Save method is used to save a clipboard page to the PegaRULES database or to an external database if the page belongs to an external class. The method uses properties on the page to derive the internal key under which it will be saved. This method can create a new instance or overwrite a previous instance with that key.

It's recommended not to use an explicit Obj-Save with write now method as it can lead to data integrity issues.

In most situations it is recommended to rely on flow processing or activity APIs such as UpdateWorkObject and Save instead of using the Obj-Save method. The APIs would update properties such as pxUpdateDateTime, pxCreateDateTime, pxUpdateOperator, pxCreateOperator etc.

Using the Obj-Save without write now method will not commit the data immediately to the database but add the update/create query to a deferred list. The data is committed when the system does a typical commit as part of case processing.

When the Obj-Save method is executed, only the cases or data objects on which the method is invoked, are saved; but the rest of the instances, such as assignments, are still not committed until the system does the commit as part of case processing. So, in case of any exceptions in the case context after invoking the Obj-Save method and before the system commits the change, the system rolls back to the previous state. 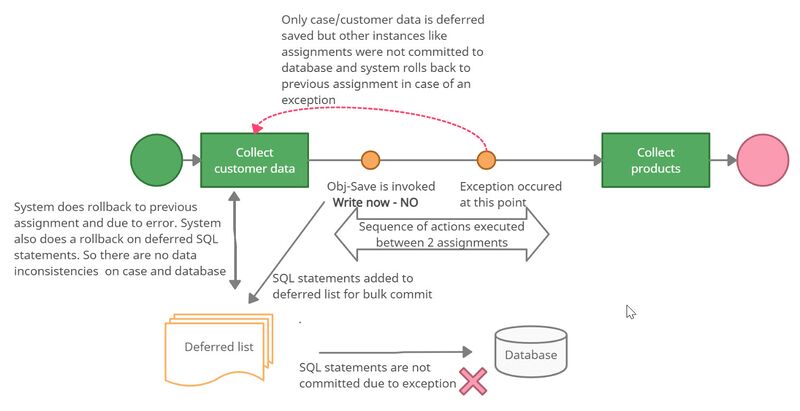 Pega provides design choices for rolling back: either the most recent only, or the complete set of deferred list statements. For example:

Using Obj-save with write now method commits the data immediately to the database without waiting for the default system commit.

When an Obj-Save with write now method is executed, only the cases or data objects on which the method is invoked, are committed, but the rest of the instances, such as assignments, are not. So, in case of any exceptions in the case context, after invoking the Obj-Save with write now method, the committed changes are not rolled back, but the system restores the rest of the data to the previous state. Due to this, data inconsistencies may occur.

The Commit method in an activity is used to persist all uncommitted changes to the database. This method writes all the instances (deferred list) specified by one or more earlier Obj-Save methods to the PegaRULES database for internal classes, or to external databases, for external classes. If any of the write operations fail, all instances in the deferred list fail and are not committed.

Loss of assignment due to an explicit commit

It is recommended not to use the explicit Commit method as it can lead to data integrity and locking issues.

For example, consider a scenario where an explicit Commit method was used in the case processing and after the Commit method, an exception occurred. When the Commit method was issued, all deferred operations were committed to the database immediately. Also, the previous assignment was completed, and changes were persisted to the database. Now, when the exception occurs after the commit, the system cannot rollback to the previous assignment as it does not exist anymore. For this reason, case processing stops with a processing error. The following image explains this scenario using the earlier example. 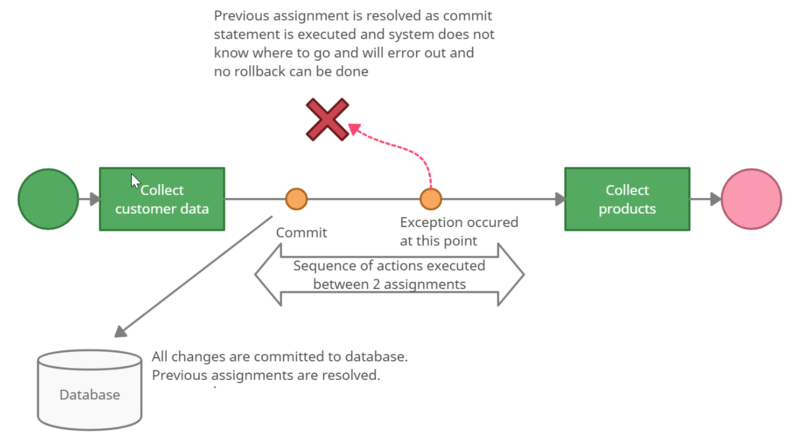 Locking issues due to explicit commit

Locking on the Pega Platform side is different from the typical database locking mechanism supplied by the database software, such as Oracle. Pega locks are exclusive to one thread and operate system-wide in a multi-node system.

Pega locks are acquired by using different APIs provided by the Pega Platform. For example, using one of the three methods Obj-Open, Obj-Open-by-Handle, or Obj-Refresh-and-Lock in an activity might acquire a Pega lock. These methods also have a Release on commit option to release the lock when the next commit command is encountered.

A commit operation releases locks that are held by a requestor session, except for objects opened without selecting the Release on commit check box.

After a commit operation by one requestor, for example requestor A, locks are released and a different requestor, for example requestor B, can acquire a lock on an instance if required. But in a case when the requestor A wants to continue with the current session, it may not be able to do so as the lock might have been acquired by requestor B. To eliminate this inadvertent loss of locks, the Pega Platform engine allows flow executions to perform a commit operation only at specific times so that the same requestor can continue with flow processing without any locking issues. Some of the typical use cases where system commits the changes are as follows:

To prevent inadvertent loss of locks, activities in an application that execute within a flow should not execute the Commit method. In case of any legitimate reasons for performing an explicit commit in an activity, after the Commit method, check the availability of the lock and then reacquire any needed locks, if not present.

For more information, refer to the following articles on Pega Community: