From PegaWiki
Controlling Public Peering Access to Pega Cloud with BGP / This is the approved revision of this page, as well as being the most recent.
Jump to navigation Jump to search

This connectivity model supports limiting access to your Direct Connect connection to ensure that only the appropriate traffic flows across it.  Since Direct Connect relies on Border Gateway Protocol (BGP) to determine the traffic that traverses the link in both directions, Pega recommends enforcing such restrictions by configuring and tuning BGP settings to meet your organization's requirements.

While Pega does not advise on the complexities of your local network configuration, certain best practices apply. This document contains guidance for controlling the scope of traffic that traverses your Direct Connect connection and avoiding some common configuration errors that can impact the flow of traffic.

Limit access and visibility between AWS and your network[edit]

AWS offers 3 levels of control for both inbound and outbound routing advertisements: 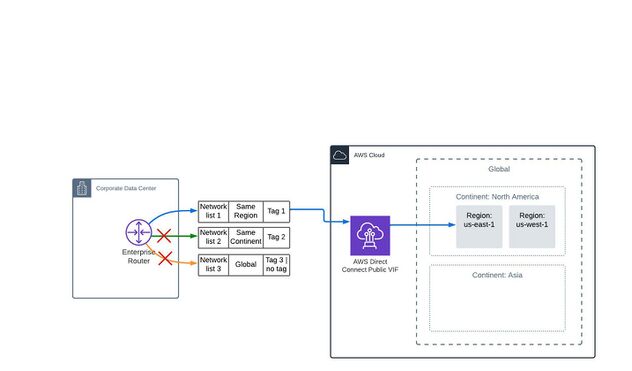 Advertising to a single region

To constrain the AWS resources your Direct Connect connection can access to a specific AWS region or continent:

Even when it makes sense to allow certain systems to access all AWS networks over Direct Connect (for example to satisfy a performance or security requirement), you might not want to extend that ability to all enterprise networks. For example, you probably want your end users to reach www.amazon.com over the internet, not over Direct Connect.

Limiting the scope of routes on local network 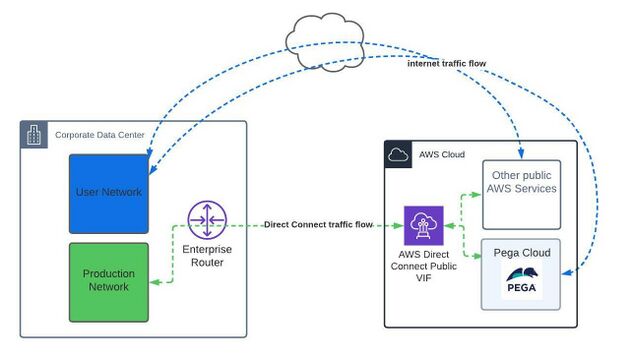 If certain users or systems do not need to use Direct Connect to reach AWS resources (for example, user traffic to www.amazon.com or any service powered by AWS), do two things to make sure that traffic routes over the internet:

Asymmetric routing occurs when traffic reaches a network over one path, but replies are sent over a different path. This can cause unexpected behavior and broken communication.

In order to avoid asymmetric routing where Direct Connect is involved, consider the following best practices:

Traffic is sourced from advertised networks[edit]

Only send traffic from advertised networks 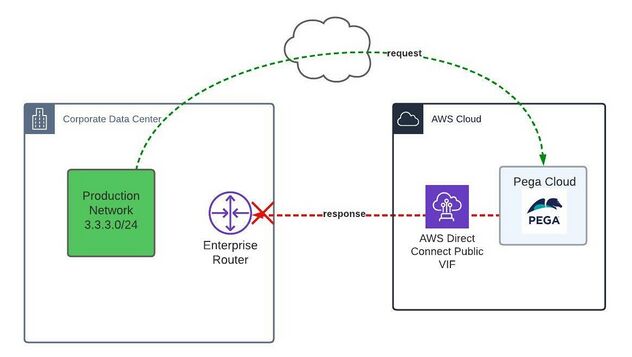 In order to avoid routing-related problems with the flow of traffic, configure your Direct Connect connection such that the traffic paths are appropriately mirrored.

If your Pega Cloud applications are the only resources you need to access over Direct Connect and you are considering further traffic restrictions, capabilities for doing this depend on which side of the connection is the traffic initiator. 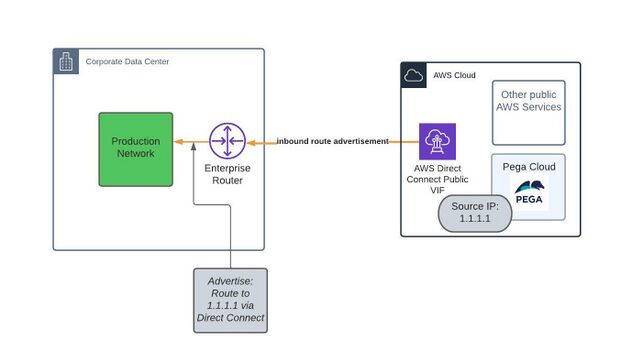 To avoid asymmetric routing (discussed in the previous section), you may need to take additional steps. For example, you may want to use network address translation (NAT) to map your production network source IP addresses to an IP address outside the range of your Direct Connect outbound route advertisement, so that traffic reaching AWS over the internet is not incorrectly sent back via Direct Connect. 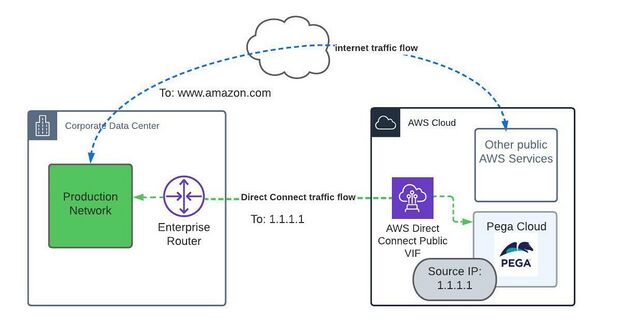 Ingress only or both ingress and egress[edit]

If certain users and systems do not need to use Direct Connect to reach AWS resources (for example, user traffic to www.amazon.com or any service powered by AWS), do two things to make sure that traffic routes over the internet:

By following this design pattern, you should be able to:

A solution that provides services for customers to augment their staff. Pega Cloud supplies the infrastructure, operational support, and life-cycle management to support Pega applications as a cloud-delivered solution. Customers sign up for services through the Pega Cloud service catalog to address their application needs.

1) In user portals, a "team" is equivalent to a "work group". 2) One or more associates who work semi-autonomously on recurring tasks or towards a common goal. In a Pega Workforce Intelligence hierarchy, departments are comprised of teams. (Defined by the WFI team)

The top level of the three-level organization hierarchy that is available for use in all of your applications. The organizational structure affects the management reports, statistics, and rules that are available to users in that organization. One system can support multiple organizations. An organization is an instance of the Data-Admin-Organization class.

The process of assigning tasks in a business process to an individual or group of individuals who are the most capable of completing those tasks.

For example, when creating an expense report, an employee creates the report, a manager approves it, and a payroll employee then sends the payment. To process employee compensation payments, you can route the task to the work queue of the payroll team, in which any member of that team can access, select, and process the work item.

If you need a person with a particular skill set to work on the assignment, you can route the assignment using business logic to a skilled group by defining a specific condition. For example, in an automobile quote request, a prospective customer fills in a form and selects an Electric vehicle check box. The request is then routed to the electric car insurance underwriters work queue, members of which specialize in electric cars.

A graphical representation that models a business process in your application by using graphical shapes and connectors to define a sequence of events. You can edit a flow in the life cycle of a case or by using the Flow form.